How to Analyze Wal-Mart with OSV

One of my recent rules of thumb is to stay clear of failing retailers that are supposed to be in turnaround mode.

To make sure signs aren’t pointing towards a slow and painful death, here are some quality indicators I look at.

The Piotroski F score is made up of 9 fundamental accounting checks.

Here’s the link to view the full details of how the Piotroski Score works and a Piotroski screener using the best criteria of the 9 scoring factors.

I use the Piotroski Score extensively because it has been proven. It cuts down a lot of time and makes it easy to analyze a stock.

The current Piotroski Score of 7 is good. Return on Assets and Current Ratio dropped, but other fundamentals are going strong. 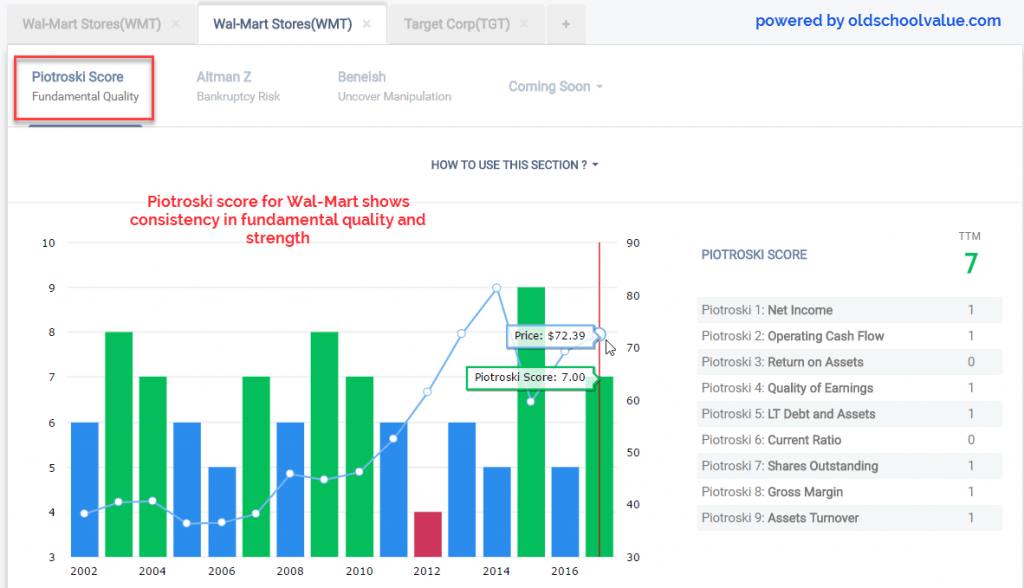 Not all ROE is created equal.

The DuPont analysis breaks down the components of ROE so that you get a clear picture of how the company is driving its profits.

It helps you answer the following questions:

Take a look at Wal-Mart and Target.

Wal-Mart’s ROE is consistent, has been consistent, and even during the recession it didn’t register a blip.

Compare this to Target’s DuPont analysis.

Target is a well run company, but has difficulties and their recent jump in ROE is due to improving Operating Income and increased leverage.

Despite Target’s latest achievements in ROE, and Wal-Mart’s slight dip, I’m giving it to Wal-Mart for consistency.

Cash flow is the lifeblood of a retailer.

The quicker this process happens, the better. You don’t want to be in Sears situation.

To see it up close, here’s a detailed breakdown of the Cash Conversion Cycle.

You see that Wal-Mart has fantastic buying power, currently paying its bills 43 days after being billed.

For the heck of it, here’s Amazon.

This includes the AWS segment, so it’s not an exact comparison, but it goes to show the muscle that Amazon flexes.

Think of a negative cash conversion cycle like an interest free loan from their suppliers. Suppliers are paying Amazon 35 days before Amazon has to pay anything off. Amazon can use this cash like float to finance their operations.

For a brick and mortar operation, Wal-Mart is still elite. Stellar fundamentals with no concern of deterioration.

Now it comes down to what price makes sense.

Ben Graham said that the price you pay will determine the result of the investment.

The question to answer is whether the current price offers a margin of safety. 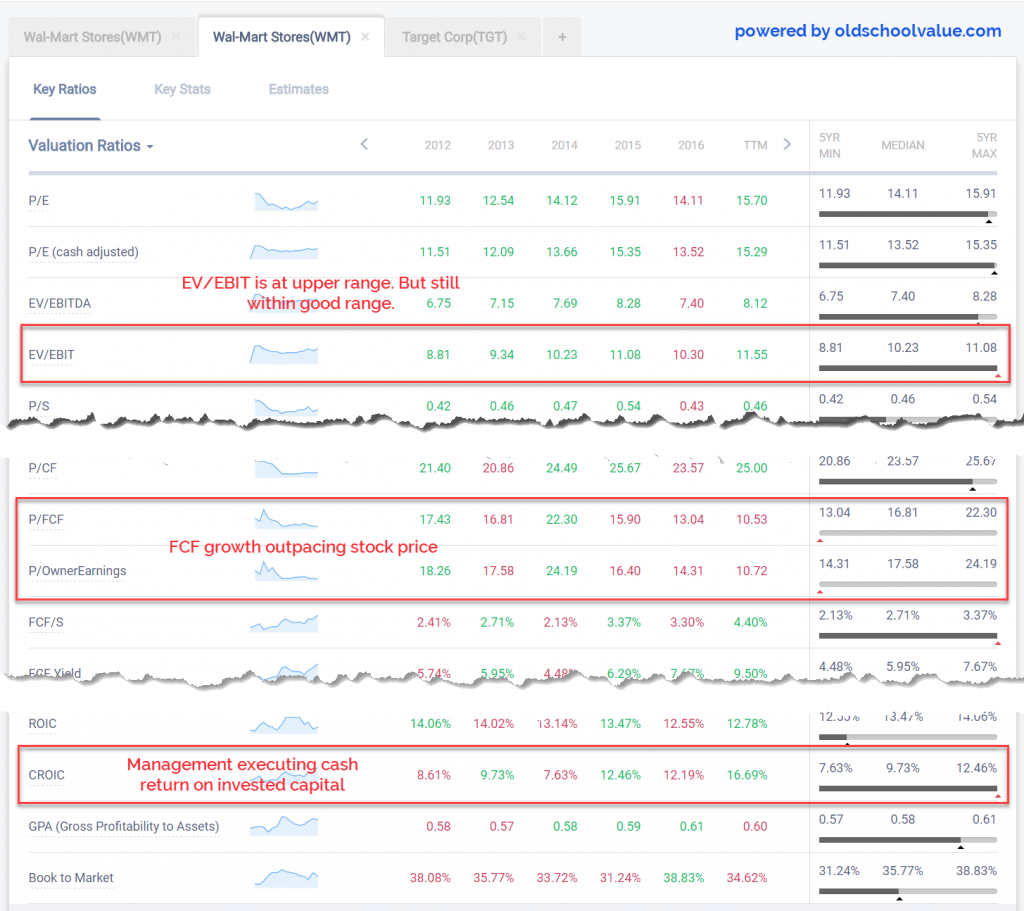 Rather than focus on a single method to value stocks, I cover my bases and look at different views.

Valuation multiples gives you a comp view. Much like how you value home prices.

DCF tells you that the value of a company is the sum of its future cash flows.

With Wal-Mart, their EV/EBIT is 11 which is at the upper range of my preferred range.

I like to look for companies trading below EV/EBIT of 11.

You see a different picture with FCF and owner earnings. FCF and Owner Earnings is growing year over year, and Wal-Mart is cheap with this metric. Anything under P/FCF or P/OwnerEarnings of 15 is value.

Before getting deeper into the numbers, valuation is more art than science.

Depending on your narrative of the company, the valuation will change.

If you believe Wal-Mart’s business will see a revival, your growth rates will be different to mine.

On the flip side, if your narrative is that Wal-Mart is going down the drain, your valuation is going to be lower.

This is why I go for a valuation range.

Fair value is a moving target.

Using a FCF starting value of 20.9B, growth rate of 5.9%, discount rate of 6.8% using Prof Damodaran’s industry specific rates and then applying a multi-stage DCF where the growth rate decays, the fair value comes out to $98.

The reverse growth rate signifies that Wal-Mart’s current stock price is pricing in a growth rate of 1.6% when compared to Free Cash Flow.

The question for you is, will Wal-Mart fair value based on FCF grow faster than 1.6%?

Let’s look at it from another angle though. 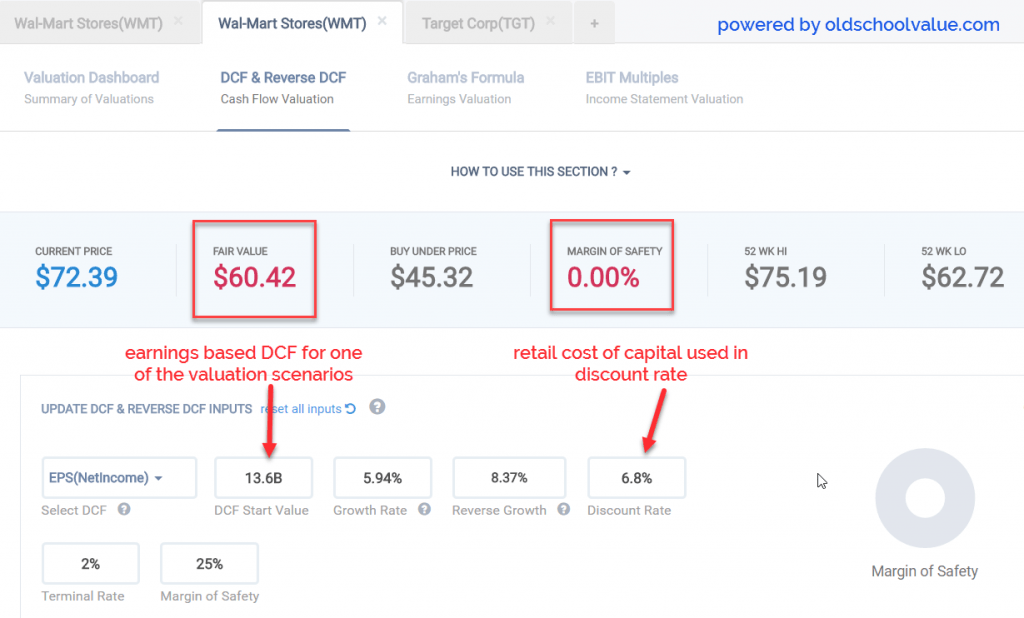 If I use an earnings based valuation where the starting value is 13.6B, Wal-Mart has to grow earnings faster than 8.37%.

Putting together the two DCF’s and the valuation ratios, the fair value range looks like it is between $60-$98.

That’s a big spread and the current price of $72 sits in the middle.

If Wal-Mart shot up to the 80’s I’d be a seller. Current price is a hold for me and I’d be a buyer if the stock price was in the lower $60’s unless you want a bigger margin of safety.

Buffett may be selling, but it’s not the end for Wal-Mart.

Patient investors will receive value, but make sure the price is right.

Long WMT at the time of writing.

Is this article helpful for you?